This historic Italianate-style building is in the center of the Old World Third Street entertainment corridor and immediately adjacent to the Fiserv Forum and Deer District.  The 5000 sq ft main level restaurant-bar space has tall ceilings, full kitchen, ADA bathrooms, bar, DJ booth, and open areas for dancing, dining, or special events.  There is a dedicated basement for storage, kegs, offices, and equipment and the opportunity for ample outdoor seating.

*Please contact JPD at 414-988-7883 for information on available space at this location.

The John Lipps building, an excellent example of Victorian Gothic architecture was designed by Charles Gombert and built in 1878 as an investment for Mr. Lipps. In the 1920’s and 1930’s the building was occupied by Winters Clothing store. Jack Winter started his men’s pants factory in the basement of the building, which eventually became Jack Winter Inc., one of the nation’s largest manufacturers of men’s and women’s garments. Jack’s brother Elmer also had his first job in the building and used furniture abandoned by the Amalgamated Clothing Workers to fill the office in his upstart firm, Manpower Inc. This building played a major role in the genesis of two companies traded on the New York Stock Exchange. Both Jack Winter Inc. and Manpower Inc. (the largest staffing agency in the world) got their starts in this incredible building. Today it continues to thrive as the home to Suite Milwaukee, Miller Architectural Group, True Course Medical Data Analysis and Claims Services, and Thermal Engineering Incorporated. 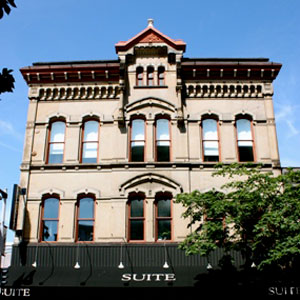 JPD is committed to maintaining a safe and inclusive environment for all of our staff, tenants, and visitors at all times at all of our properties. Our core company values of respect, equality, tolerance, empathy, and hard work are the foundation for our actions and interactions. JPD celebrates the ethnic and cultural diversity throughout society and the differences between us that enrich our community and enhance the quality of life for each of us.